While rains will bring relief to growers, strong winds could cause widespread damage to farms 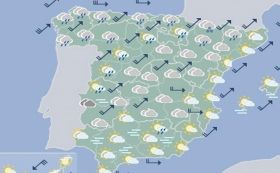 Producers throughout Spain were on high alert as Storm Ana swept through the country on Monday, bringing very strong winds and heavy rainfall to much of the Peninsula.

While the precipitation will bring relief as the country endures one of the most prolonged droughts in living memory, there are fears that high winds and strong and persistant rains could damage fruit and vegetable production, particularly in northern parts of Spain.

National meteorological agency Aemet issued a warning that rainfall could exceed 80-100 litres per square metre in mountainous areas in the north west, especially in Galicia.

Aemet issued an amber wind warning for all provinces of Andalucía and a yellow rain warning for Huelva, Seville, Cadiz, Córdoba, Málaga and Granada. This means that winds of around 90km per hour are expected, with gusts of up to 100km per hour in some areas.

The weaker and more dispersed rain that is expected to arrive in Valencia and Murcia later on Monday will be welcomed by producers who have been facing water restrictions as reservoirs run dangerously low.

The government has held a series of crisis meetings with agricultural leaders in recent weeks to address the urgent issue of water scarcity. Proposals on the table include expanding the capacity of desalination plants and opening up dry wells.

Meteorologist Mario Picazo told Europa Press that “it would have to rain continuously for two months in order to resolve the drought that is affecting some parts of Spain”, which he put down to global warming and the melting of the ice caps.