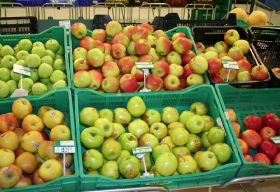 Poland, the leading apple producer in the European Union, is anticipating a drop in production and exports for 2017/18 following the spring frosts that hit the country and many other European nations.

According to a US Department of Agriculture GAIN report based on FAS Warsaw statistics, apple production for marketing year 2017/18 is set to fall 20 per cent year-on-year to 2.8m tonnes,

There is contrasting data, however – the government of Poland's main statistical office pegs the 2017/18 crop at 2.3m-2.6m tonnes, while Polish industry estimates have the crop at 3m tonnes.

The USDA said that growers of the Idared variety suffered the most severe losses in 2017/18, with Champion, Gala, and Gloster varieties faring better.

Fresh apple exports are forecast to decline from the previous year, due to lower production and fruit quality, with the USDA expecting exports to reach 800,000 tonnes, about 300,000 tonnes less than 2016/17.

Indeed, during first quarter of 2017/18 exports from Poland were 40 per cent lower than the corresponding period year, mostly attributed to lower exports to Belarus and Egypt.

"Polish growers continue to look for new export destinations and see the Canadian and US markets as good opportunities," the report noted.

Pear exports are forecast to decrease by 22 per cent to 40,000 tonnes, due to the lower harvest, with key export destinations including Belarus, the EU and Lithuania.

Imports of pears into Poland are set to grow 14 per cent to 40,000 tonnes, with most sourced from the Netherlands and Belgium.