Two grape varieties from the IFG stable, Cotton Candy and Candy Heart, will appear in South African supermarkets this week 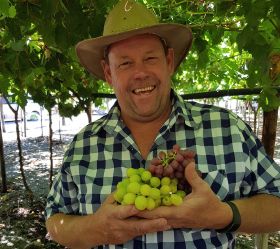 Andre Vermaak with the Cotton Candy and Candy Heart varieties

Two table grape varieties that have already caused a stir in the US and other markets, are being introduced to South African consumers this week.

Cotton Candy, a white seedless grape, and Candy Heart, a red seedless cultivar, both from the IFG breeding programme, will be seen on the shelves of the Checkers Shoprite group.

The grapes are from new plantings at Silverland Farms in Aussenkehr, Namibia. “Cotton Candy, in particular, has been a talking point in the US because of its unique flavour and Cotton Heart has the same qualities,” said Andre Vermaak, managing director of Silverland Farms.

Vermaak said that the Checker category manager, Freshmark, had snapped up this season’s crop from Silverland Farms.

“They approached us to offer these grapes to South African consumers and we are already seeing demand from various sources to get their hands on them," he outlined. "At this stage we do not have any of these varieties for export and we believe South African consumers, mainly in the Cape region, will have a special treat this year. Naturally, as production grows, we will also be able to ship to our other customers, but for now they sell themselves.”

Vermaak said the Namibian season, which started in early November, will probably end by the end of the week. “We have culled all our Red Globe which carried us into the New Year and now only have most of the newer varieties which put us on an exciting path to growth in future."

Silverland Farms is pleased with the berry size of its new varieties, and this has been the result of slightly later pruning during warmer weather.

Vermaak explained that Silverland Farms had packed all its grapes in the vineyard this year and this had reduced handling and resulted in excellent quality being delivered to overseas customers.

While these new exciting varieties are now emerging from Namibia, there are also indications that the Namibian crop could be short of the original estimate of around 6m cartons.

“We saw a slightly lighter Flame Seedless crop on our farms,” confirmed Leon de Kock of Grape Alliance. “Overall, the Namibian crop could be around 15 per cent lighter than what was expected.”

De Kock added that with a lighter crop in South Africa’s Orange River region, supply could be short of demand for most of the early to mid-season.

“Wind delayed a number of vessels in Cape Town this season, most of them having arrived in Europe over the past weekend or early this week. This will ensure enough supply for the pre-Christmas sales. However, the wind is still causing problems in Cape Town, affecting the loading and departure of another vessel this weekend.”

Due to this, he said, the under-supply position will be maintained into the early part of January.

With the Namibian harvest just about done and dusted, all eyes will be on how things will pan out for the rest of the harvest in the Orange River, the Olifants River along the west coast and in the later regions of the Western Cape.