Thomas Rhodes, executive chef at England's national stadium has seen a jump in demand for veggie and vegan options 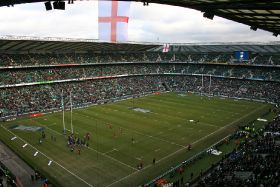 Demand for veggie and vegan food at England Rugby’s nation stadium, Twickenham, has surged according to the famous arena’s head chef.

England fans might be preparing for tomorrow’s test against South Africa with beer and barbecues, but not as many as you might think according to Thomas Rhodes, executive chef at Twickenham.

He told an audience at the London Produce Show that he has seen a huge rise in vegetarian options under his watch as rugby fans become more conscious about what they are eating.

“The majority of match day food is obviously things like meat pies,” Rhodes said. “We used to cater to about 8 per cent vegetarian options and 1 per cent vegan. But over the past 12 months that’s jumped up to between 20 and 30 per cent.

“A lot of our vegetable suppliers are teaching us how to impart the flavour of the vegetable, rather than relying on the meat. Our client base is now a little bit more curious about they are eating.”

England fans are in line with rising demand for vegetarian and vegan eating. Demand for meat-free food rose 987 per cent in 2017 according to Just Eat, with 68 per cent of the country now describing themselves as “flexitarian”, a group that aims to eat mostly vegetables with occasional meat.