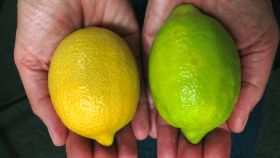 Tesco is selling green lemons after a shortage from Spanish growers hit supply to the UK.

The supermarket lifted its quality specifications to accept the fruit, which has the same tasting flesh, but an unripened rind. The decision also helps avoid further waste in the home, adding another two days shelf life as it turns yellow.

The shortage was caused by significantly reduced end of season volume in Spain, from where the UK gets most of its lemons until the end of spring. Traditionally in late June the South African lemon season starts which then takes over as the UK’s main supply source.

Tesco citrus fruit buyer Savia Weidinger said: “These greener lemons that we now have on sale are already mature and perfect tasting inside but need longer for the skin to turn yellow.

“With the South African crop that happens towards the end of June as evenings cool which helps the fruit to colour up. The move not only means that shoppers will again be easily able to buy a fruit that is growing in popularity but they will gain extra freshness.”

It’s not the first time Tesco has sold non-spec crops, with green satsumas going on sale last October. One supplier said stocking the full crop will help educate consumers to see beyond aesthetics.

“That's something that we’re trying to do through these releases, as we have done with the satsumas in the past. It’s all about making sure we utilize the crop when it’s aesthetically different, but doesn’t affect the taste.

“People can get used to seeing the full crop, and to get to that stage you need to utilise as much as we get, decreasing waste both at home and on the farm.”