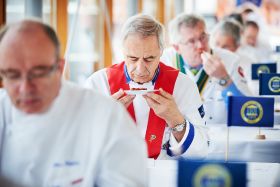 Several leading names from the international fresh produce business have scooped Superior Taste Awards at this year’s ceremony in Brussels.

The prestigious honour, which is bestowed upon a basket of different food and drink products each year by the Belgium-based International Taste and Quality Institute, is based on blind tastings undertaken by judges from 15 of Europe’s most renowned culinary associations.

Among those securing the coveted honour this year for “exceptional taste and quality” was international soft fruit supplier BerryWorld, whose Twilight blueberries and GB96 strawberries each gained a two-star ranking, indicating a “remarkable product” with marks between 80 per cent and 90 per cent.

Also recognised at this year’s event was Dole Japan’s Sweetio pineapple, which has now achieved an “exceptional” three-star rating for five years in a row.

Among previous Superior Taste Award winners in the fresh fruit and vegetable industry is Fresh Del Monte, which in 2016 was presented with three awards for products in its Fresh Guac avocado dip range.

Under a free licence, winners of the award are entitled to refer to it in their marketing for three years.