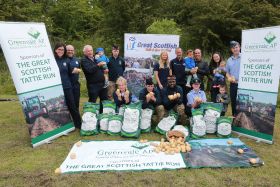 Potato producer Greenvale, which has major production sites in Scotland, has announced it will sponsor two ‘tattie runs’ in the country.

Taking place at Silverknowes Promenade on Sunday 1 July, the race will begin at 2pm.

Tracey Mattock, Greenvale’s marketing manager, said: “We are delighted to be sponsoring this event for a second year. We have two sites in Scotland, at Craigswalls near Duns and Burrelton in Perthshire, and we employ over 400 people from these sites alone.

“Sponsoring a tattie run is a perfect fit with our business and this year we will have a strong contingency attending from our sites, all kitted out in Greenvale branded T-shirts.”

Contestants will cover a one-mile course with men carrying a 20kg net of potatoes over their shoulders, while women carry 10kg. Children from the age of two can also enter various races at the family friendly event, including a spud and spoon race and junior races.

The race will take place on Sunday 11 August in the centre of Perth with roads in the city centre will be closed off for the event.