A delicate, thin-skinned rarity, the limited-edition cherry is enjoying its moment in the supermarket spotlight 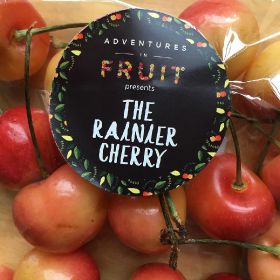 Fans of the distinctive yellow-red cherry variety Rainier could find more of the fruit is available in the UK within the next few years as increasing domestic production coincides with continued supply from the US Pacific north-west.

At a special event hosted by M&S and Northwest Cherries yesterday near Elstree Studios on the outskirts of London to promote this year’s Washington State cherry season, Rainier was very much the star of the show.

Bailey said he believed there was potential for the variety – a cross between Bing and Van – to be supplied in relatively larger quantities in future.

“We are growing Rainier in the UK right now, selling from farms in Worcestershire and Kent,” he revealed. “These come into the market broadly at similar times to the US. Given how delicate and thin-skinned they are, it’s good to have people pick pretty them much into punnets in the field, rather than having them go down multiple grading and production lines. You’re getting them as fresh as possible.”

Rainier cherries from the US north-west are currently available for a couple of months in summer (late June until early August) and, given their delicacy, sweetness and quality, are very much a premium product that’s in short supply for a limited period.

As such, they remain a key point of difference for Marks & Spencer’s fresh produce offer, said Bailey, who added that the quality of fruit in the market this time around had been excellent.

“It’s been a good season,” he told Fruitnet. “The quality from the States has been good and we’ve been seafreighting from there, which is very positive. What’s more, with a company like Marks & Spencer there is a good outlet for it.”