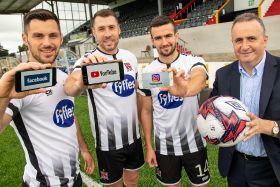 Dundalk FC players Patrick Hoban, Brian Gartland and Michael Duffy are pictured with Fyffes Ireland managing director Gerry Cunningham in Oriel Park at the launch of ‘The Next Chapter’

Banana importer Fyffes has released another film production which continues to tell the story of Dundalk Football Club and its achievements in domestic and European competitions.

Entitled ‘The Next Chapter’, it is the fourth video in the series produced by Fyffes since its sponsorship of the club began.

The storyline of this latest video deals with the club’s response to the challenge being set by rivals and its disappointment at having missed out on winning its fourth league title in a row last year. Coverage is also given to the benefits their success has brought to Oriel Park in terms of player morale, team confidence and future development.

Formally launched by Fyffes Ireland managing director Gerry Cunningham at an event in Oriel Park recently, ‘The Next Chapter’ is in the style of its three predecessors, each of which focused on a distinctly different aspect of the Dundalk FC story.

To-date, these first three videos have attracted over 1m views across YouTube, Facebook, Twitter and other online media. In that, they are said to have had a ‘beneficial influence’ in helping to create an international awareness of Dundalk FC and in giving the Club an aura of solidity and success similar to that enjoyed by leading clubs in the UK and elsewhere.

Speaking at the launch, Gerry Cunningham said: “as with all clubs in major competitions, strong backing has a vital role to play. As a company strongly rooted in Dundalk, Fyffes is proud that the sense of security our sponsorship brings allows administrators, team managers, players and coaches to focus more effectively on the important task of winning matches."

Responding, Dundalk FC chairman, Michael Treacy said: “Fyffes’ ongoing sponsorship is helping the club achieve success and is providing a way for us to share our journey as the team’s story unfolds”.