Banana giant is marking its 130-year anniversary this September 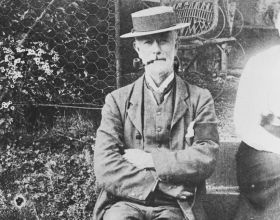 Fyffes, Europe's largest banana importer and leading marketer of organic and Fairtrade bananas, is celebrating its 130th anniversary this month.

September 20th 1888 saw the first banana ever offered for sale under the Fyffes brand sold in London’s Covent Garden.

It followed a visit by Edward Watham Fyffe who – having taken his wife to the Canaries to help her recovery from tuberculosis – became intrigued by the world of tropical fruits, most significantly the banana, which he imported into the UK.

Acquired in 1986 by Dundalk fruit importers, McCanns – and now part of the Japanese Sumitomo Corporation – Fyffes has grown to become a multi-national brand with an annual turnover of €1.2bn.

With its long-standing, established partners in the tropics and a supply chain linking Central America and Europe that ensures product is grown, harvested, shipped and ripened in the best possible conditions, the company sees itself being best positioned to offer the highest quality fruit for present and future generations.

“By marking 130 years in the banana business we are shining the spotlight on the generations of wonderful people and partners who have contributed to our success over those years – and on those who will do so as we move forward," said Fyffes chairman David McCann.

Besides being the world’s first fruit brand, Fyffes also ranks as the importer with the world's highest number of certified production partners, some of whom it has worked with for more than 50 years.

To mark its anniversary year, Fyffes will be focusing on brand communications in markets where the brand is sold.

Using social media and other channels, it is intended that the Fyffes brand story will be brought to life for consumers, with an emphasis placed on those corporate social responsibility element that remain a priority for the company.

Indeed, with charities, community organisations and established foundations such as The Fundauniban of Colombia, Fyffes says it is committed to improve the living standards of growers through many different projects.