Putting the plus in CA+

There are more than 55,000 Star Cool CA systems in operation, with MCI looking at the next level of service – low-respiration fruit. 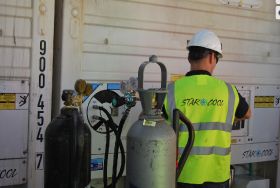 Maersk Container Industry (MCI) is building on the established success of its controlled atmosphere (CA) Star Cool reefers by offering a service package for high-value fruits with special demands.

This CA+ service is, according to the group, taking the proven concept of Star Cool CA and moving it to the next level – high value crops including blueberries and lychees.

Indeed, CA+ is primarily directed at perishable cargo with a typically lower respiration rate or the need for protection against the fungus Botrytis through elevated CO2 levels.

It also gives operators complete transparency and control of the atmosphere inside the container throughout the journey, ensuring the fruit arrives in the best possible condition and aiding in external shelf-life.

The Star Cool CA+ service offering has been in operation for the full 2017/18 season and has, ultimately, served to streamline decision making and lines of communication, increased visibility of gas levels and reduced costs.

As well as handling the coordination of the loading and cargo preparation, the CA+ service package includes providing the necessary CO2 and N2, as well as cargo insurance of up to US$100,000 per reefer. In addition, shipping lines with satellite monitoring can follow atmosphere levels throughout the journey – enabling them to react quickly to any control irregularities.

Table grapes, one of the most popular crops worldwide, are constantly at risk from developing grey mould caused by Botrytis, with the traditional way to arrest its development being to pre-treat the fruit with sulphur dioxide (SO2) during post-harvest. The grapes are then placed in cardboard boxes with SO2 pads before being loaded into a shipping container.

However, the use of SO2 has been widely questioned due to environmental and health concerns, spurring MCI on to take the lead in finding a new solution.

“CA Technology has been commercially use in blueberries in several countries, so we wanted to test its potential for table grapes over long journey times,” said Dr Bruno Defilippi Bruzzone, head of the postharvest unit at the Institute for Agricultural Research at La Platina Experimental Research Centre in Chile. “Among the benefits, the application of an adequate O2/CO2 combination in grapes would slow the fruit’s metabolism, control decay and avoid excessive water loss.”

Initial tests involved trials performed Thompson Seedless and Red Globe grapes and, in general, levels of decay observed immediately after storage were very similar for both CA and SO2 treatment, as was quality during the shelf-life period at 20oC.

Preliminary trials have suggested that CA technology with high levels of CO2 could be an effective way of preventing grey mould development in table grapes. While the research is still in its early stages, the positive results point towards ocean trials as a next step.