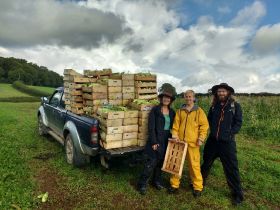 Riverford founder Guy Singh-Watson has been joined by local Extinction Rebellion volunteers to pick thousands of surplus sweetcorn cobs for activists in London next week.

The organic veg box company has donated around 5,000 cobs to feed the climate action group, which is due to stage a two-week direct action and mass protest across London and various other cities to step up pressure on the government.

Singh-Watson said: “I am supporting Extinction Rebellion because I want there to be a future for my children, and the billions of other people on this planet. Right now, I see government failing in its responsibility.

“I think we all have a responsibility to do our best for the planet and for future generations.”

He was joined in the fields by around 10 volunteers from the Totnes branch of Extinction Rebellion (near Riverford’s base in Buckfastleigh, Devon), as well as the veg box firm’s co-owners, who were undeterred by the rain to pick throughout the day.

The sweetcorn cobs will be delivered to London by Riverford and used to help feed the thousands of activists expected to attend the protests from next week.

Extinction Rebellion has three core asks: for the government to tell the truth about climate change, reduce greenhouse gas emissions to net zero by 2025, and establish a Citizen’s Assembly to oversee climate and ecological justice.