Rise in plant-based eating and sustainability concerns create broadly positive picture for the trade, according to Kantar's Joe Shaw Roberts 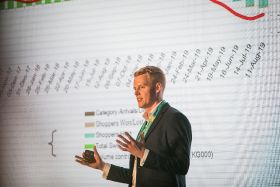 Concerns over sustainability and the rise in consumption of plant-based meals point to a bright outlook for Britain’s fruit and vegetable producers, while the UK’s impending departure from the EU will bring fresh opportunities – as well as challenges – for the sector.

This was the broadly positive picture painted during the opening session at FPJ Live on 8 October.

Setting the scene, Kantar’s Joe Shaw Roberts said the market for plant-based meals has grown by 21 per cent since 2015 and is set to keep on growing as more consumers ditch meat over concerns for their health and the environment.

However, not all vegetables will necessarily benefit from the trend: the category can be roughly divided into vegetables that are more likely to form part of a meat-free meal, such as tomatoes and cucumbers, and those typically eaten with meat, like potatoes and carrots.

Overall, the produce category is in relatively good shape, however, showing 2.2 per cent growth in the past year and is currently valued at £12.6 billion. This has been driven by sales of wholehead fruit and vegetables as consumers move increasingly towards cooking from scratch – partly over concerns about plastic packaging and their health and partly to save money.

Conversely, sales of prepared produce have slowed this year after a period of sustained growth, in spite of the price gap between prepared and wholehead produce being at its lowest for five years.

Roberts warned that with prepared produce set to continue to face pressure the category will need genuine innovation that adds value and is more sustainable than the current options available.

The discussion then turned to the industry’s post-Brexit future, with Jack Ward of the British Growers’ Association and AHDB Horticulture chair Hayley Campbell-Gibbons agreeing that with the prospects of a deal fading fast, a lack of clarity and certainty posed the biggest threat to British growers in the short term.

Campbell-Gibbons suggested that while trade will continue to flow in the immediate aftermath of a no-deal withdrawal, labour shortages, the cessation of agricultural payments and greater exposure to global competition would create significant aftershocks for producers.

There was agreement too about the potential for British fruit and vegetable producers to thrive outside the EU. Ward pointed out that horticulture had been poorly served by Brussels in comparison to other parts of the agricultural sector and suggested that with the right support from the government, the outlook for the UK’s fruit and vegetable growers was good.

Asked what the future farming strategy should look like, Campbell-Gibbons and Ward stressed the need to focus on integrated crop management, increased labour efficiency, and more effective promotions.

“The government needs to realise that as an industry we need more help in the form of capital grants to fund the switch to robotics and groundbreaking research that will drive productivity gains and bring about a step change in the industry,” Campbell-Gibbons said.