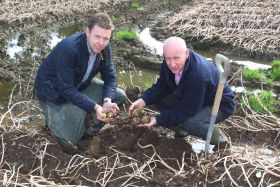 A tenth of the country’s potato crop is still in the ground, with an extremely wet autumn and difficult earlier conditions making life extremely difficult for producers.

Around 10 per cent of Northern Ireland’s potato crop remains unharvested amid heavy rains and “atrocious” ground conditions, according to a grower survey.

The research, carried out by one of the country’s leading potato packers, Wilson’s Country, found that many growers have now halted further lifting until the spring, with harvesting operations now over for the year.

Growers report that it has been one of the most trying years in living memory: crops were planted in challenging conditions; a very dry spell followed, which hampered growth rates; and then growers were hit by an exceptionally wet autumn.

“Normally, the bulk of the harvest would have been completed by the end of October, however the heavy rains of late summer, which persisted throughout the autumn, have conspired to get us to the stage we find ourselves at today,” said the managing director of Wilson’s Country, Lewis Cunningham.

“In August, the average rainfall for Northern Ireland was 162 per cent of the 30-year average with September at 121 per cent, so as farmers started to lift crops the ground was not in ideal condition.

“Ground conditions in recent weeks are atrocious, particularly in County Down. As a result, it has proven impossible for many growers to complete the harvest in a timely fashion.”

Further consequences have been that growers have had to spend more money to lift their crop while potato quality has suffered, with Cunningham reporting higher levels of bruising and crop damage, resulting in more grading.

Going forward, Cunningham said there was “no doubt” that frost and further anticipated flooding will continue to affect crop yields and quality. However, he stressed that Northern Ireland wasn’t alone in facing difficult conditions, with floods in England also impacting heavily on growers.

Despite the current challenges, Cunningham was optimistic about the local potato market, which grew by 3.1 per cent in volume and 12 per cent in value in the 52 weeks to 3 November, according to Kantar.

Consumers have been buying potatoes more often and a little more each time, the data revealed.