Online grocery sales 'to rise by a third' 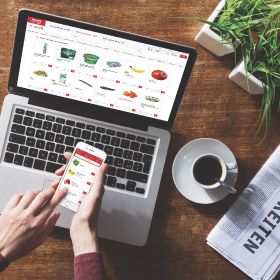 The UK’s online grocery market is forecast to grow by a third in 2020 with market researcher Mintel predicting a lasting shift in shopping behaviour beyond the coronavirus crisis.

The pandemic has sparked a huge boost in online sales and Brits are set to spend an estimated £16.8 billion on internet groceries by the end of the year, according to the food and drink market research agency Mintel. This is up from £12.7bn in 2019.

The phenomenal rise follows four consecutive years of slowing growth – in 2019 growth fell to a historic low of just 2.9 per cent – but now the market is set to be worth £17.9 billion by 2024, according to Mintel. This would amount to 41 per cent growth over the five-year period.

Research conducted between 28 February and 23 April revealed that 36 per cent of Brits have increased the amount of online shopping they do, while 50 per cent are trying to limit the time they spend in bricks-and-mortar stores.

A further nine per cent say they have used click-and-collect more than before.

In the very early days of the spread of the coronavirus in the UK, before social distancing measures were announced, just seven per cent of shoppers increased their total amount of online shopping, on both food and non-food items.

Then, in the space of less than two months, online shopping saw a dramatic boost, with the number of consumers who say they’ve increased their online shopping rising to 36 per cent.

Mintel’s Nick Carroll believes the change in shopping habits will last beyond the crisis. “Over the course of just a few months, Covid-19 has had a seismic impact on Britain’s grocery sector,” he said.

“The pandemic is giving a significant short-term boost to online grocery services, as shoppers look to avoid stores and limit their contact with the outside world. However, the impact will last beyond the crisis.

“Shopper numbers in the online grocery market have plateaued in recent years as retailers struggled to get new customers to try these services. The outbreak is bringing a new audience to online grocery, and this should boost the market long term, with strong growth forecast through to 2024.

“While there is currently a significant disruption to the online grocery market, with some retailers not accepting new customers, this will ease in the short term as more capacity is brought online.”

The current social distancing guidelines, which ask those aged 70 and over to remain at home, mean that older shoppers are more heavily reliant on having groceries and other goods delivered. But while some older Brits are experienced in ordering online, they are by far the minority.

According to Mintel, only 28 per cent of UK internet users aged 65+ were online grocery shoppers prior to coronavirus, although 37 per cent say they have done more online shopping since the outbreak began.

“Older generations that had previously shied away from online grocery have effectively been forced to change their habits in the face of social distancing measures,” Caroll said.

“While there has been a rise in online grocery shopping among the over-65s, the reality is a significant number of consumers in the older age groups have no experience shopping online for groceries and/or are not digitally native.

“There is a real need to ensure access to online grocery deliveries for older consumers. We’re seeing some retailers already thinking of easier ways to order goods, including phone orders for next-day delivery.”