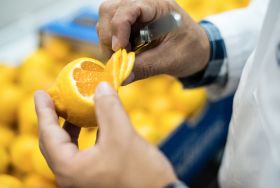 While Covid-19 continues to be problematic for the South African export sector, many fresh produce organisations are already taking a longer term look at the future.

One of them is PPECB, the standards and inspection service of the South African fresh produce industry.

He said that while the organisation is in the short-term still navigating its way through the Covid-19 situation, the role that it should play in future is also being evaluated.

“One of the greatest challenges facing South Africa in terms of exports is the lack of sufficient access to more export markets,” said Garrett. “Many of our fruit exports still only have access to Europe. If South Africa wants to earn foreign exchange and grow the economy by creating jobs it needs to open additional markets, especially in the East.”

The PPECB can play a vital role in this regard by supporting market access initiatives through creating confidence in South African exports and by supplying the necessary technical expertise where it is required.

“In the rapidly changing world, the PPECB has already embarked on the journey of a digital business transformation strategy," he continued. "We need to remain at the forefront of new developments and focus on creating a stable ICT infrastructure and increased cybersecurity. Going forward it is the aim of the PPECB to become more efficient, contain costs and become more customer centric.”

The organisation wants its customers to see the PPECB as their partners rather than just a service provider, according to Garrett. "We want to be adding real value to our customers.”

Garrett joined the PPECB board during 2016 and served as the chairperson of the board’s audit committee until January 2020. He represents the subtropical fruit industry.

“The PPECB is pleased with Garrett’s election as chairperson," said PPECB chief executive Lucien Jansen. "He is a familiar face in the agricultural industry and understands the dynamics of the industry very well. The PPECB is certainly looking forward to his leadership, especially with the organisations striving towards digitalisation, improving stakeholder relations and supporting market access.”