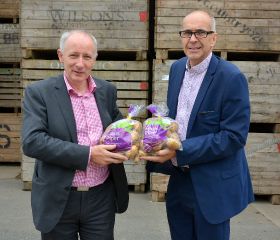 Lockdown measures in Northern Ireland during the peak of the coronavirus crisis helped boost potato consumption in the country, Kantar figures suggest.

Wilson’s Country managing director Lewis Cunningham said that more people have been buying potatoes for the past year, with an increase in consumption particularly pronounced following March, when Boris Johnson announced sweeping lockdown measures to combat the spread of coronavirus.

Wilson’s Country is the largest potato grower in Northern Ireland with operations based in Craigavon.

“Individual purchase volumes increased by 6.4 per cent over the past year totalling 85.4kg,” Cunningham said. “Potatoes now enjoy a 97.6 per cent retail penetration in Northern Ireland. That’s up 1.4 per cent on 2019 levels.

“All of these trends point to a very positive story for the local potato sector. They also confirm the growing consumption of potatoes in homes. Significantly, these trends became apparent before the introduction of the Covid-19 lockdown.

“We saw the expected, seasonal boost in potato consumption at Christmas time 2019. However, this momentum was maintained into the New Year.

“There’s also little doubt that the lockdown measures have encouraged more people to cook at home more frequently, across the board.”

Greater consumption will likely have been helped by lower retail prices in Northern Ireland too.

“The average price of potatoes in the shops has fallen over the past 12 months. The Kantar survey confirms an average price of 82p/kg for the 52-week period ending June 30, 2020,” Cunningham said. “This represents a 4.2 per cent reduction on the previous 12 months.

“Potato sales in Northern Ireland for the past year totalled £50.8 million, representing a 3.9 per cent increase on the previous 12 months. Sales volumes increased by 8.5 per cent during the same period, exceeding 60,000t.”

According to Cunningham the diversification of potato formats is proving popular, with the Wilson's Country branded format also doing well.

“Smaller pack sizes mean less waste in homes. We are also seeing a growing demand for peeled, chilled potatoes and fresh chips,” he said. “In our own case branded retail sales have increased by 19.6 per cent year-on-year.”

Despite the encouraging figures, potatoes suffered from the sudden shutdown of restaurant and catering industries. Cunningham said the Eat Out to Help Out Scheme introduced by chancellor Rishi Sunak to help boost the foodservice sector, has helped the potato industry.

“The lockdown measures almost wiped out potato sales into the service and catering sectors. And it’s doubtful if we will see demand from these industries fully recover any time soon.

“The eat-out to help-out scheme, which launched a few days ago, has already resulted in an increase in orders to us and is a really welcome development.

“Potato sales have fared well over the past 12 months. It is to be hoped that the trend towards more people cooking more often at home will be maintained.

“However, potato packers are taking nothing for granted. There is an onus on companies to continue investing in new ways of making fresh potatoes more attractive to consumers across the board.”