Although some fruit was affected by inclement weather this season, Turkey’s Ani Tarim predicts an increase in fig production and a record export volume 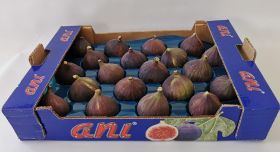 After the conclusion of a successful cherry season in early August, Turkish exporter Anı Tarım Fresh Fruit has swiftly shifted its focus to exports of fresh black figs out of its own facility in Bursa.

The Turkish black fig season runs from around mid-August to mid-October, and recent years have seen a constant increase in black fig production in the Bursa region, around which almost 97 per cent of the country’s black figs are cultivated.

Although production volumes are still expected to rise this season, some fruit has been affected by inclement weather, according to Anı Tarım’s marketing manager, Mehmet Çakmak.

“Black figs are an incredibly sensitive and unique fruit, with weather conditions having a direct impact on pollination and fruit growth,” said Çakmak. “Due to unfavourable weather conditions this season, including aridity and sharp temperature differences in the fig cultivation region, we anticipate a decline of around 5-15 per cent in the expected volume. However, the quality of the crop is quite good, so this has naturally led to fluctuations and increases in prices.”

Since figs provide a good income for Turkish growers, many have chosen to expand their fig plantations, according to Çakmak, and he said that newly planted areas could help to push the region's total production beyond last year’s record of 28,000 tonnes.

He said that sales in Europe were performing well, while demand on Asian markets had been affected by the impact of the Covid-19 crisis.

“We are having a good season in terms of deliveries to Europe,” he said. “Our main markets in Europe – France, Germany and the UK – are showing high interest in black figs. We have already exceeded last year’s export record of 770 tonnes and hope to reach a total of 950 tonnes by the end of this season.”

Its investment in an advanced sorting machine three years ago has helped Anı Tarım to meet the market’s requirements, according to Çakmak, and allowed the company to gain a constant presence in the fig business.

“We also work with experienced growers during the procurement process,” he said, “which helps us to deliver consistently high quality to our customers.”

Beyond Europe, Anı Tarım supplies its partners in Singapore, Malaysia and Hong Kong by airfreight. However, this season, sales have been disappointing, according to Çakmak, with demand seemingly affected by high procurement prices and increases in airfreight rates due to Covid-19.