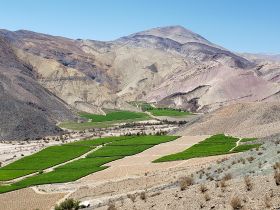 Chilean table grape exports are set to increase by 12.5 per cent in 2020/21, according to the first estimates from Asoex.

Forecasts from 30 companies, which accounted for 54 per cent of last season’s shipment total, point to an export crop of 674,939 tonnes or 82.3 (8.2kg) cartons. A second estimate will be released in mid-January.

The increase is mainly due to winter rains bringing temporary relief to regions impacted by a long-term drought.

However, shippers face an uncertain market outlook due to the second wave of Covid-19 currently sweeping through many Northern Hemisphere markets.

Outlining the opportunities and challenges the sector is currently facing, Bown said the industry had prepared well for the season.

But many local workers are unable to work because they are ill or self-isolating. At the same time, there are fewer foreign workers available, particularly from Bolivia, due to bureaucratic delays at the border caused by the pandemic.

“The situation is particularly acute for table grapes in northern regions, as well as for cherries and blueberries that are now in the middle of their harvest, and the situation could get worse once the stonefruit and table grape harvests in central zones come online,” he said.

The Asoex president said the problem has been made worse by some workers being unable to access childcare, while others fear losing out on emergency government income and healthcare payments.

“We are analysing both situations to find a solution with the respective authorities,” he said.

In spite of the challenges, Bown was optimistic about how the season is advancing, noting that exports are at similar levels to last season.

“I want to emphasise that, this season, there are also opportunities to celebrate, especially derived from the opening of new markets, such as the entry of Chilean Hass avocados to South Korea and Australia, as well as the opening of Vietnam for cherries, where we have started with the first promotions, as we are doing in the Indian market,” he said.

The recent approval by the US of the Systems Approach for Chilean blueberry exports from Ñuble and Biobío, which means fruit can be shipped without fumigation treatment, should also lead to an increase in organic blueberry shipments, Bown added.

Cherries accounted for 38 per cent of the total exported, followed by apples on 14 per cent, avocados on 13.6 per cent, and blueberries with 8.6 per cent.