Rain has disrupted harvesting and packing in the Hex River Valley, while wind causes damage in Elgin orchards 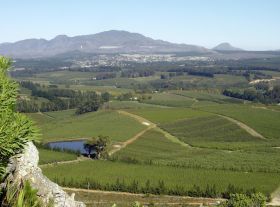 Winds have hit apple and pear production in the Elgin region

The 2021 season continues to be difficult for South Africa’s fruit growers. Producers in the Hex River Valley have suspended packing following rainfall in the area.

The first winter rains, which were accompanied by strong winds, have also caused damage to other crops in certain regions.

Coupled with the logistical challenges of getting enough containers for exports, it has made makes the season a tough one for the deciduous industry.

Table grape growers in the Hex Valley may resume packing from Wednesday (17 March) onwards and have around 25 per cent of the crop left before the end of the harvest.

Most of what is left is the Crimson Seedless variety. Ironically, the pause in packing has given exporters and logistics companies time to relieve pressure on coldstorage rooms.

There is currently a shortage of containers in the Cape region and the delay in packing is helping to work volumes away from inland terminals.

The pressure on coldstores came from three weeks of record packouts, which put the system under strain.

South African grape growers are experienced in handling conditions after rain and growers have said they are confident that they will be able to finish their season on a high note.

“Competitive volumes in the markets are expected to reduce in the weeks ahead due to lower supply from other countries, also because of climatic conditions,” says Francois Rossouw of Mooigezicht Estates.

It is expected that SATI will update its crop estimate by Friday following consultation this week.

Further afield in the regions of Elgin and Vyeboom, the first winter storm brought strong winds and apples and pears were blown off trees. It is not clear what the impact will be on the total crop.

Meanwhile, some logistics service providers have described the problem of getting enough containers for their clients as a crisis.

Wind delays in Cape Town and certain port inefficiencies have meant that some of the container vessels are bypassing the port.

“Empty containers being returned to South Africa are therefore not discharged in Cape Town and end up some 850km further up the coast at ports near Port Elizabeth," said one logistics operator. "From there they have to be trucked by road to the Western Cape – all at cost of the grower.”

What is concerning is that the situation is driven by international factors which will not be resolved quickly.

The decline in the South African economy and therefore also in import demand, lower rates on the South African route compared to other routes, as well as lack of investment in new vessels and containers, are reportedly some of the reasons why there is a world-wide shortage of containers.

With South African industries in a growth phase it is particularly important to have the situation rectified as soon as possible.

The apple and avocado export seasons are moving towards their peak, while citrus exports will pick up momentum from April onwards.