In the UK, Compagnie Fruitiere is boosting efficiency with its new banana ripening centre at London Gateway, while in France the company is diversifying 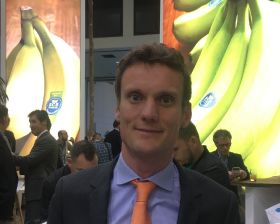 This month, French supplier Compagnie Fruitiere opened its new banana ripening centre at DP World London Gateway in the UK, the first in the world to be fully automated, according to Gautier Fischel, vice-president of distribution and marketing.

Following a month of trials, the centre is now fully operational, with a capacity of around 100,000 boxes of bananas a week.

“It is a large building, so we can develop additional rooms, which we plan to do in the coming years in order to boost volumes and have a wider product development,” says Fischel. “There are train links from London Gateway to cities in the north of England like Wigan, where we also have a facility. We have the best set-up for ripening in the UK, in terms of energy efficiency, carbon footprint and also productivity.

“The train service will be used to deliver containers directly to a northern hub (Old Trafford Manchester or Garston Liverpool). They will then will be shunted to our depot in Wigan where they will be ripened and delivered to our customers’ facilities in the north. This create efficiencies and reduces road miles.”

The UK has always been either the first or second market for Compagnie Fruitiere, behind only its domestic market.

“It’s a big market for us,” says Fischel. “Because of the large volumes on the UK market, the consistency and regularity of the programmes, we think a fully automated system could be possible and achievable in the UK. We believe it’s the future, so we’re investing in it.”

The company also supports Fairtrade. “It’s one of the best ways to guarantee fair value for growers and workers,” says Fischel. “We are now one of the biggest growers of Fairtrade, in Ecuador, Ghana, Cote d’Ivoire and Cameroon. We are also developing our organic volumes. By the end of the year, we will have more than 1,500ha of organic bananas in three origins: Ghana (600ha), Ecuador (600ha) and Cote d’Ivoire.”

The company is equally working on a ‘third way’ banana between Fairtrade and organic – “an ecological banana”, according to Fischel – in cooperation with the WWF and experts from Cirad.

“We want to develop ‘almost organic’ bananas, using only fertiliser, but getting rid of all pesticides,” says Fischel. “We’re doing trials right now that are working quite well.”

“We want to leverage our set-up and develop our expertise in these products, in terms of ripening, imports and sales, and we’re doing this step by step. We started with mangoes first in France, and it’s working well. We have quickly developed a large market share. We have a very high quality of service because we are very close to the customer, with our own specialised reefer vessel.”