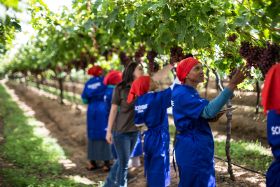 While there are signs that South African exports of table grapes have reached a peak and may be stabilising, the country is expected to export the same volume in the new season as it did last year.

Despite climatic and other challenges, the country shipped a large volume of grapes to the world’s markets in 2020/21. In the end, the final reconciliation revealed that more than 74m cartons were packed for export.

In releasing its first estimate for the 2021/22 season, the South African Table Grape Industry (SATI) said it estimated an intake volume ranging between 70.6m and 77.7m cartons (4.5 kg equivalent).

“The mid-point is estimated at 74.2m cartons, which is close the volume packed during the 2020/2021 season,” the industry body said.

Although new plantings of higher yielding cultivars are expected to continue to come into full production, SATI noted that the 2021 vine census, which forms the basis of the crop estimate, indicated a decrease of 536ha under table grapes in South Africa, down from 21,100ha to 20,564ha.

“When the latest census is compared with the 2019 census, there is a decrease of 1,234ha in plantings, providing further evidence of consolidation in the South African table grape industry,” SATI said.

“South African producers will focus on going back to basics,” noted Anton Viljoen, chairman of SATI. “Growers will focus on the aspects under their management from growing to preparing bunches, packing and meeting customer’s needs.

“We must also keep in mind that we farm under the ‘blue skies’ where everything is possible and nature can take its own course," he said. "We manage it as best we can to continue to provide our renowned quality and the world’s best tasting table grapes."

Evidence of South Africa's ongoing commitment to delivering the best quality table grapes is in the substantial investments made, not only in planting and growing the latest cultivars, but throughout the value chain.

“This includes investments in modern packhouses and related technology, cold rooms as well as equipment and capacity to meet the rigorous global ethical, environmental and social standards of markets.”

SATI said that the two early regions, namely the Northern Provinces and Orange River, are due to start harvesting and packing from early November.

“The mid to later regions, the Olifants River, Berg River and Hex River, will start harvesting as usual about a month or more after the early regions," SATI added.