Fruit Logistica kicks off in Berlin 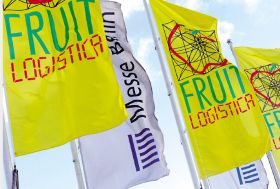 All key market players as well as small and medium-sized companies within the international value chain will be present at the Berlin Exhibition Grounds from 8 to 10 February 2012. Some 2,537 exhibitors from 84 countries will be presenting a full range of products and services from all levels of fruit and vegetable production and marketing.

According to event organiser Messe Berlin, around 90 per cent of exhibitors come from outside Germany, while more than 56,000 trade visitors from 130 countries will be at the trade fair and accompanying conferences. Visitors include all major industry decision makers and commercial partners from the wholesale and retail trades, along with fruit and vegetable growers, importers and exporters.

The biggest contingents based on the number of exhibitors are from European produce trading nations are Italy (457 exhibitors), Spain (274), the Netherlands (266), Germany (265) and France (238), while new exhibitors from Mauritius, Montenegro, and Mozambique are participating.

"More than any other top international trade fair, Fruit Logistica has established a unique position as industry leader," said Messe Berlin GmbH COO Dr Christian Göke. "The key criterion is the fact that this is a must-attend event for virtually all key decision-makers and fresh produce trading partners. With 90 per cent of the exhibitors coming from outside of Germany, Fruit Logistica is more international in scope than any other trade event in Germany. The success story of this exhibition is impressive and the 20th edition of Fruit Logistica is bound to set new records."

Turkey is s the Fruit Logistica 2012 partner country. With a growing international demand for its high quality products, an enormous production capacity and increasingly competitive structure, Turkey is one of the world's leading fresh produce trading nations. The country, which annually produces 44m tonnes of fruit and vegetables with exports valued at US$2.1bn, has been present with a joint exhibition stand at Fruit Logistica every year since 2000. Turkey exports 2.9m tonnes of fruits and vegetables annually, equivalent to 6.6 per cent of total production and is aiming to increase the value of its exports to US$10bn by 2023.

The Fruit Logistica Innovation Award (FLIA), meanwhile, is regarded as the most coveted industry award for innovations in the fresh produce sector. The FLIA honours outstanding new products and services that give impetus to the fresh produce industry. Ten candidates from the numerous entries where chosen by an expert jury for the final round, with trade visitors at Fruit Logistica casting their votes for the innovation of the year at the FLIA stand  located in the passageway between Halls 20 and 21. The winner will be honoured at the award ceremony on 10 February.