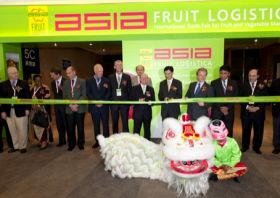 Asia Fruit Logistica, the region's leading fresh produce trade event, has announced that a number of new companies have signed up for the three-day show, which takes place on 5-7 September this year.

For the first time, Uzbekistan will be represented at the show in the form of central Asian grower, importer and exporter Fresh Green Agro Group (FGA), which is targeting new markets in Asia.

"Our main aim of participating at Asia Fruit Logistica 2012 is to establish new partnerships with Asian countries and increase our stable partners in this market," said Murat Kurshu, vice-president of FGA. "We believe attending such a prestigious trade show will open doors in Asia for us."

Other companies to have signed up to the event include K Fresh (Thailand), Alquimia Fruits (Spain) and Locate and Grow (Singapore), while South Africa and Argentina are set to join Australia, Brazil, China, Chile, Egypt, France, Italy, Korea, the Netherlands and New Zealand in hosting their own national pavilions.

For the first time, the event takes place at a new venue, the Asiaworld-Expo, and again runs alongside the Asiafruit Congress.