Asiafruit Congress 2012 opens with a boom

Speaking on the staggering rise of the Chinese economy, Patrick Vizzone’s keynote address set the agenda for this year’s instalment of the Asiafruit Congress. 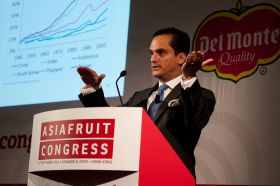 Rabobank’s Patrick Vizzone highlighted China’s phenomenal economic growth and the various challenges and opportunities it presents for the fresh produce sector in his keynote address at Asiafruit Congress 2012.

With China accounting for 60 per cent of global economic growth what happens there now has word-wide implications.

During his address to several hundred delegates from Europe, the America’s, Asia and the Pacific, Vizzone used his considerable knowledge of the Asian region to illustrate the stunning growth the country has generated, particularly over the last five years.

Perhaps one of the most striking illustrations of this boom came through comparing China’s incremental growth to other economies within Asia.

“China’s growth created four and a half Indonesias, seven Thailands and 22 Vietnams in the last five years,” he explained. “China creates a new Vietnam every 90 days.

“The numbers are really staggering, so to say that China is to big to ignore is really just a massive understatement."

And while that country’s agricultural output has increased 14 per cent since 2007, this has not been sufficient to cater to an increasingly wealthy and urbanised population. As such the food trade deficit more than doubled from US$32bn in 2006 to US$65bn in 2011.

“China is now a huge net importer of food. It is dependent on imported food,” said Vizzone.

China's astonishing growth rate, however, does face some challenges and not least from the middle income trap, or what some economists call the BRIC wall. This occurs when GDP per capita falls within a US$5,000 to US$15,000 bracket, explained Vizzone.

“On the one hand they can’t compete with the advanced economies that are highly skilled, creative and innovative, and all of that good stuff, but they also can’t compete with low income countries producing cheap manufactured goods.”

Compounding this is weakening global demand, Vizzone added. “Export markets are not going to be the growth lines that they once were.

“China is going through a massive rebalancing of its economy, particularly with exports, in 2007 exports were 39 per cent of the GDP, and are now 29 per cent. Some people argue this is going to return much slower growth rates in the future."

With labour costs on the increase China is losing its cost competitiveness and imports are growing at 20 per cent, Vizzone explained.

While this news would no doubt be welcomed by growers and exporters in supplying countries, Vizzone warned that Rabobank predicts the world is entering into a period of high food prices as supplies fails to keep pace with increasing demand.

This he explained would be exacerbated by the ‘muted signals’ growers were receiving as to the increased demand.

“We at Rabobank believe the world is facing a period of agri-commodity scarcity and we think it is set to last for at least this decade but there are some things that could change that, such as a double dip recession or changes in biofeul policies, but these things will only prolong it happening.”

Prices were expected to increase and become more volatile, added.

“There’s nothing new here in terms of commodity cycles – but previous price spikes have been met with strong supply responses, and prices went down – the best cure for high prices is high prices,” said Vizzone. “However the supply side is really facing limitations this time with productivity being stalled and famers are facing week price signals rather than high price signals.”

This was a result of changes that have taken place in the value chain over the last 30 to 40 years that have lead to a structural bargaining power imbalance, he explained.

“Farming is the most fragmented sector of all and it is wedged between two of the most consolidated and powerful segments. First is the farming crop imputs sector and the second is primary processing which includes the world’s largest agricultural trading companies.