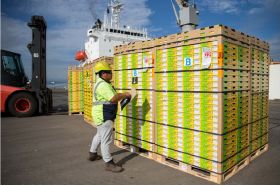 Zespri’s final result for 2014/15 shows an industry that is "back on track and revitalised for the strong growth outlook ahead", the group has said.

Chairman Peter McBride described the campaign as "extraordinary", with total fruit and service payment up 17 per cent on the previous year to NZ$939m. Zespri’s global kiwifruit sales reached $1.57bn, up 16 per cent on 2013/14, while export earnings increased by 18 per cent to NZ$1.09bn versus the 2013/14 season.

“These strong headline results were achieved because of the effort of growers, the post-harvest sector and the Zespri team onshore and in the markets,” McBride said.

Zespri sold 69m trays of Zespri Green Kiwifruit from New Zealand at the highest-ever average per hectare return for the industry of NZ$53,884 and a very strong average per tray return of NZ$6.01.

"The lower per hectare return also reflects the fact that average industry Gold3 yields are below potential at this stage, following the recovery from Psa," Zespri said. "Average yields will increase strongly as developing canopies come into full production in the next few years."

On the supply side, there are still a number of orchards and growers affected by Psa, but the industry is focused on proactively managing the risk, Zespri continued. The volume of New Zealand-grown kiwifruit sales increased 11 per cent to 95.2m trays, with Gold3 continuing to provide a robust recovery pathway for the industry. Gold3 is on track to reach over 60m trays of supply by 2019/20 as new plantings and new grafts come into production.

“Our result was helped by sales performance and by productivity increases, with average yields now at nearly 9,000 trays per hectare," said McBride, talking about the successful Green season. "The shortage of Chilean kiwifruit in the market, following severe frosts in Chile, also contributed to the strong Green returns.

Demand for Zespri Organic Green Kiwifruit remained steady in 2014/15, with sales of 3.5 million trays and a return of NZ$43,996 per hectare. Green14 was well-received by customers and Zespri continues to work to understand the positioning of this product. The average orchard gate return per hectare of NZ$29,682 reflects that productive hectares are not year at full commercial production levels.

Supply of non-New Zealand kiwifruit increased from 11.2m trays to 13.3m trays. There was a notable increased in volumes sold into both Europe and China of Green Kiwifruit, with most production sourced from Italy. Zespri Global Supply delivered a profit before tax of NZ$8.99m.

Zespri Chief Executive Lain Jager said that the company would remain focused on delivering strong, sustainable returns to growers and shareholders, but also pointed out some headwinds weighing on performance.

Looking ahead, foreign exchange, the recovery in supply of kiwifruit from Chile and Gold3’s rapid volume growth will put pressure on per tray returns, the group explained. Zespri’s May forecast for the 2015/16 season sets out a returns range of NZ$5.00 to NZ$5.50 per tray for Green Kiwifruit and NZ$6.70 to NZ$7.20 per tray for Gold Kiwifruit.

In terms of the long-term strategy, Jager said that Zespri was committed to preserving and building its position as the category leader, delivering high-quality product through a premium, branded strategy.

“We will focus on consistently delivering the premium quality and taste that Zespri Kiwifruit is known for, growing productivity, developing our supply chain and service offering, and leading the category in our commitment to food safety and sustainability," he said.

In terms of its corporate result, Zespri’s net profit after tax for the year was NZ$34.6m, althoug this reflects an exceptional one-off factor which is the inclusion of Gold license revenue that had been deferred from prior seasons.

Normalised profit after tax, which excludes the NZ$13.1m that relates to licence income, was NZ$21.5m.