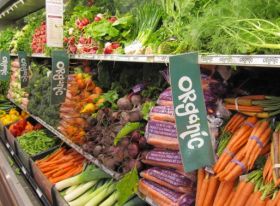 Certified organic grocery sales have grown 127 per cent in New Zealand since 2012, according to the 2016 New Zealand Organic Market Report.

“Gen Y in particular are really pushing this and our findings show that they’re willing to pay more for healthy, socially-responsible products,” said Brendan Hoare, CEO of Organics Aotearoa New Zealand (OANZ), the industry body that commissioned the report.

“The organic sector offers enormous opportunity for New Zealand to grow our economy, both domestically and in exports.”

Organic exports have grown 11 per cent since 2010, with organic fresh fruit and vegetables accounting for more than 45 per cent of total exports in terms of value.

Alongside the increase in consumption of organic produce, organic horticultural production is also increasing, with kiwifruit and apples and highlighted as key organic crops.

“Certified organic is a sustained global shift in consumer behaviour and New Zealand stands to benefit immensely from increased engagement,” Hoare said. “Organic fresh fruit, wine, dairy, processing and domestic retail sectors are thriving in this country and each is backed by a solid export sector that is diversifying into new markets, particularly Asia.”

The report identified challenges in organic fresh vegetable and red meat production, where growth has not been as strong as in other sectors.