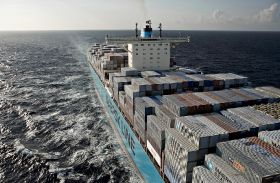 Shipping giant Maersk Line has reported a second quarter 2016 result that is US$658m lower than that recorded in the same period of 2015, a loss that the company has attributed to record low freight rates.

Revenue through the quarter was US$5.06bn, 19 per cent lower than the same period of 2015 (US$6.26bn), although volumes were 6.9 per cent higher as Maersk Line delivered on its objective of growing at least in line with the market to defend its leading position.

Maersk Line´s capacity grew 2.2 per cent, and container shipping demand growth was about 2 per cent, with the global container fleet (capacity) growth about 6 per cent. "Consequently, the market conditions continue to be very challenging," the group noted.

“Freight rates dropped in the second quarter of 2016 to record low levels and we made a loss as we were unable to reduce costs at the same speed," said Søren Skou, CEO of Maersk Line. "We are not satisfied with our second quarter result. We continue to deliver on our growth and cost objectives. We have won market share and we have record low unit costs as our network is close to fully utilised. On top of this, we maintain our lead on competition measured on profitability."