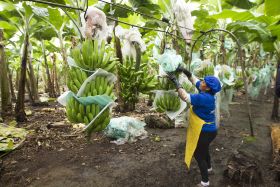 Fairtrade organisations across the Commonwealth have come to together to call on heads of government to prioritise fair trade.

An open-letter has been sent to leaders asking them to use their position to improve the lives of farmers and workers across the Commonwealth.

The call comes during the Commonwealth Heads of Government Meeting (CHOGM) which is taking place in London and Windsor until April 20.

Fairtrade is active in 29 countries across the Commonwealth with 1m Fairtrade smallholder farmers and agricultural workers living and working in Commonwealth countries, as well as large consumer markets for Fairtrade goods in the UK, Canada, Australia & New Zealand.

The letter, which has been sent to Commonwealth heads of government including UK Prime Minister Theresa May, New Zealand Prime Minister Jacinda Ardern, Canadian Prime Minster Justin Trudeau and Kenyan President Uhuru Kenyatta, asks leaders to prioritise five issues set out recently in a report from the Fairtrade Foundation.

“The Fairtrade movement has come together to urge the Commonwealth to prioritise fair trade for development throughout the 53 member states," said  Tim Aldred, head of policy and research at The Fairtrade Foundation. “Fairtrade is making a real difference in the lives of some of the world’s poorest people, but much more remains to be done.

“The Commonwealth can lead the way in unlocking the power of trade to end poverty and human rights abuses," he added.

Support for women’s economic empowerment, including measures to promote women’s leadership, access to finance and asset ownership, represents a huge opportunity for the Commonwealth, the letter noted.

Women, on average, comprise 43 per cent of the agricultural labour force in developing countries but own far less land and livestock than men.

It is calculated that closing the employment participation gap and wage gap between women and men would have a global value of US$17tn.

Among the other measures proposed is a commitment to living incomes and ending poverty wages in the Commonwealth supply chains; for example banana workers in the Lower Volta region of Ghana receive about £122 a month and a rise of only £44 would provide workers with the living wage.

"Fairtrade is supportive of existing efforts brought forward by countries including the UK and Canada to address modern slavery and human rights abuses, and we hope that other Commonwealth countries will follow suit," the organisation noted. "Australia is expected to pass its own modern slavery law in the coming months."

Embracing Fairtrade represents a "huge commercial opportunity" for the Commonwealth, the organisation said. The Fairtrade retail market in the UK grew 7 per cent in 2017, according to independent data.