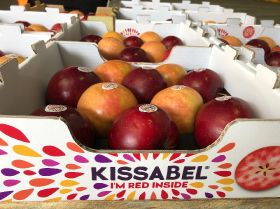 “We have been really encouraged by the quality of most of the series under test in Australia," he said. "All of the varieties have exhibited a pleasant range of orange/salmon coloured skin with attractive deep-pink to red internal colour and very attractive white lenticel on most as well.”

In Chile, Unifrutti has also reported a good crop. “Despite the reduced availability of water and high summer temperatures resulting from climatic change we had a nice Kissabel crop with excellent skin pigmentation and beautiful, intense red colours inside," said production manager Riccardo Gatti. "Hopefully, we are going to start marketing the next season.”

“We have our first crop here," he said. "Quality is very good from young trees. We will carry on with tests for one or two more seasons, so commercial launch is five years away. The goal is to have a sweeter selection for Asia as this region represents now about 50 per cent of our exports.”

Argentina is also in the test phase, with promising results. “During this season we have noticed that the fruits have a greater level of acidity, therefore we have opted for late harvests, in order to better balance the flavour," Moño Azul's Nicolas Sanchez outlined. "We have high expectations for some varieties of red pulp and envisage terminating the evaluation phase with the next harvest.”

“No commercialisation has been planned at this point," confirmed Tanith Freeman, product development manager at Dutoit Group. "Two of the varieties evaluated are looking promising and show potential.”