The South Australian Potato Company has released its new Kestrel variety, marketing it under a “Purple = Taste” campaign 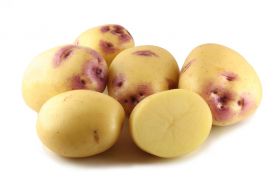 The new variety, named Kestrel, features white skin and flesh with purple patches on the potato’s eyes. “You can’t miss it in the supermarket with its distinctive and attractive purple splashes,” said the company’s business development manager Julian Carbone.

Kestrel will be available from the South Australian Potato Company’s production for 12 months of the year, and is currently being marketed in Australian supermarkets with a national “Purple = Taste” campaign.

The company is also planning to export the variety to current markets in Malaysia, Singapore and Dubai, said Mr Carbone.

“We’re hoping to increase our presence in those countries, and hopefully move into additional countries in South East Asia in the medium- to long-term,” he told Fruitnet.com.

“We’re working with various importers in terms of joint marketing initiatives, and we’ll be running the “Purple = Taste” campaign in those markets as well.

“We’re trying to get the message across that the purple is supposed to be there and it’s a good thing. Kestrel has a very high taste level, so we’re trying to link the two.”

The variety is a general-purpose potato, suitable for salads, baking, mashing and frying.

Kestrel is licensed from Australian agribusiness group Elders, and was developed in Scotland by breeder Caithness Potato Ltd.

“The variety has moderate resistance to common scab, and based on our production and our contracted farmers’ production, the yield is good and the skin appearance is excellent,” said Mr Carbone.

“Skin appearance is often more important than yield for us. We can have 30 tonnes per acre, but if the appearance is poor we can’t sell it.”