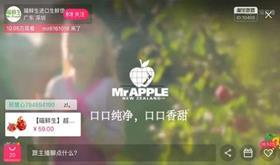 To promote the first airfreight arrivals of new-season pipfruit from Mr Apple, Tmall Fresh hosted a number of marketing events, including a live online broadcast that drew more than 260,000 viewers, and the launch of new premium gift packs.

PiqaBoo pears were another product featured in the NZ Flavour campaign. To celebrate the new product’s nationwide launch, Tmall Fresh sold the premium red-fleshed pears in their original import packages to its online customers.

Since the opening of an Australia-New Zealand headquarters in Melbourne in February, Alibaba has been ramping up its offerings from the two countries. A Tmall Fresh spokesperson said the e-tailer would continue its efforts to source premium fresh food products from Australia and New Zealand, and looked forward to working with more major players in the two countries.