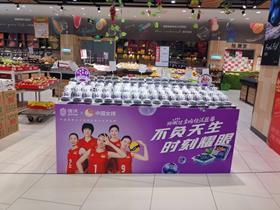 The partnership sees JWM become the team’s official supplier, with its Joyvio blueberry, Joyvio durian and Joyvio banana brands becoming the official fruit of the team.

In a statement, JWM said the partnership represents the group’s brand tone of knowledge, fitness, personal improvement and kindness.

JWM said it hopes its partnership will assist the team in achieving glory once again.

Brand new fruit packaging and retail displays have been created to mark the partnership, and will be showcased nationwide at partner retailers’ stores, including Walmart, CR Vanguard, Ole’, Sam’s Club, JD, Freshippo, Yonghui and more.