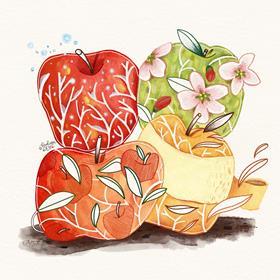 One of over 1,000 artworks submitted as part of the competition. Design by Roberta Ranieri.

Marlene, one of the most popular apple brands in Italy, is celebrating its 25th anniversary with a digital contest that encourages consumers to design its promotional material.

The designs will make up part of an integrated communications plan comprising digital media, television and trade activities.

Founded in 1995, the Marlene brand has grown constantly throughout its first 25 years to become one of the best-known brands in the fruit and vegetable sector in both Italy and many of the countries in which it is present with its apple varieties.

Hannes Tauber, marketing manager of the VOG Consortium, said recent market research confirmed the reputation of the Marlene brand and its popularity with consumers, with a brand awareness of over 90 per cent in Italy.

“Producing an apple isn’t easy. Our producers can be regarded as genuine artists thanks to the tireless and passionate work they carry out every day in their apple orchards, which are located in unique places in terms of exposure and climate, like the lands between Merano, Bolzano, Bressanone and the lower Atesina,” said Tauber.

“This is why we have decided to ask our consumers to tell us what the Marlene apple means to them by creating a drawing, an image, a genuine artwork that speaks to the world using the same language.”

For two months, until 15 November 2020, consumers from across the world will be able to directly upload their images in a special section of the Marlene website.

Over 1,000 images have already been uploaded. A jury will then select the best 25 artistic contributions on the basis of criteria including aesthetic quality, the celebratory nature of the content and the emotions transmitted by the creation.

The top ranked artwork will form the basis of the communications to celebrate the 25th anniversary of Marlene. In addition, all 25 finalists will be able to visit the apple kingdom of South Tyrol during a stay in the farmhouses managed by Marlene producers.

“We want the 25th anniversary of Marlene to bring new energy, impetus and positivity to the sector, changing the way that fruit is presented,” concluded Tauber.