A tribute to Marc Bahbah 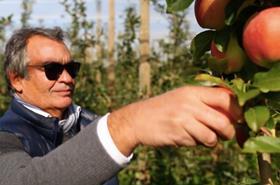 My friendship with Marc Bahbah started in 1982 at the GIE (economic interest group) of Pays de Loire where we worked for Auguste Bruchet and François Sarazin. Full of energy and ideas, we launched the design of new 60x40cm packaging made out of cellular polypropylene, before we would go on to join Pomanjou.

In 1984, Pomanjou created an office to market its fruits beyond France’s borders, and Pomanjou International was born. Marc joined the Pomanjou International office in 1987, joining Valérie Lacharlotte and myself. Marc developed a major collaboration with family business Rouge Gorge, which would strengthen the growth of Charentais and Galia melons for export.

In 1989, Marc started the company LPC, which had become necessary for packing our fruits in 1kg trays and sachets in order to bring added value to medium and small sizes. In 1996, LPC expanded its volumes and moved to a new site in the Industrial Zone of La Chapelle d’Aligné. In 1998-1999, he started importing apples and pears from the Southern Hemisphere (South Africa and New Zealand) in order to provide activity for fruit stations 12 months of the year.

2000 marked a new adventure for Marc with the launch of our first Honeycrunch apples on the market. Marc would organise and supervise the development of the commercial brand. In 2001, Marc became managing director of Pomanjou International and SCICA Pomanjou. In 2007-2008, he coordinated the repatriation of all packaging from SCICA Pomanjou, based in Ecouflant, to a single site at LPC in Chapelle d´Aligné.

In October 2009 came a major event: the fire at SCICA Pomanjou, which damaged 10,000 tonnes of fruit, as well as boxes and coldrooms. This would occupy Marc for many months, managing the insurance, the crop left hanging on the trees and waste disposal.

In 2015, we discovered and together validated the project for the new variety, Zingy. In 2018, Marc passed his know-how of Honeycrunch and all its customers to Arnaud de Puineuf, before retiring.

His was a busy and accomplished working life. Pomanjou International and Innatis found a strong link in Marc, whose brilliance and intelligence helped the company to develop exponentially during his 36-year tenure.