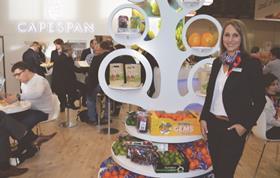 Adele Ackermann, Capespan’s brands and promotions manager, has announced her resignation to pursue other opportunities in the fresh produce business.

Ackermann has been responsible for Capespan’s international promotions and brand development for the best part of 20 years. She is well-known and highly regarded in the international fresh produce world.

“Capespan is sad to announce the resignation of Adéle Ackermann, brand and communications manager,' said Tonie Fuchs, managing director of Capespan Group. 'Adéle joined Capespan on 1 June 2001 and fulfilled numerous roles during her nearly 20 years of service at Capespan.'

Fuchs said that during the past few years, Ackermann had served a pivotal role on Capespan’s executive committee and was instrumental in the repositioning of Capespan’s strategy. “Her dedication to our business and commitment to our marketing brands will be sorely missed.”

Ackermann has now assumed the role of marketing manager for Clemengold.

“While Capespan is sad to see Adéle leave, we are thrilled for both her and Clemengold,' Fuchs added. 'We look forward to many years of working closely together with Adéle and our partners at Citrogold.”

Clemengold was not available for comment at this stage and Fruitnet understands that announcements will only be made at a later stage.

At Capespan she managed the Cape and Outspan brands and helped to develop new branding initiatives such as the soft citrus brand, Gems, which is used by the company to market its soft citrus product.

During the initial stages of Covid-19 she also coordinated the fresh produce industry's media responses as to the effect of the pandemic on the export sector.

Charl du Bois, Capespan executive, said Ackermann had made an enormous contribution to the company, including many successful branding and promotional development initiatives.

She is replaced by Adri van Niekerk, who has been with the company for some time and is also a member of the company’s citrus and table grape teams.