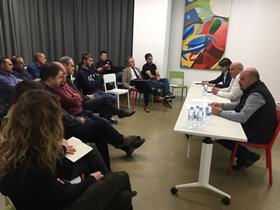 Catalan fruit association Afrucat has agreed to back an emergency plan for the Spanish stonefruit sector consisting of a raft of short- and long-term measures, including the grubbing of 10,000ha of production.

Such a plan would reduce Spain’s output by a quarter, equivalent to 300,000 tonnes, according to Afrucat’s director general Manel Simon, who said it could be enough to reverse the losses accumulated since the start of the Russian veto in 2014.

The association estimates that the Catalan stonefruit sector will lose €90m in the coming campaign and is urging Spain’s agriculture ministry to invest €50m in the start-up plan.

Sisco Palau, president of Afrucat’s stonefruit committee, said it was vital for producer organisations and agricultural unions to work together with the state to implement the plan.

The other measures being proposed by Afrucat are the extension of more favourable credit facilities; investments in innovation to reduce production costs; greater concentration of supply; campaigns to increase consumption; the opening of new export markets and the creation of new export consortiums.