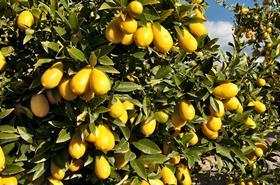 Ailimpo's opening forecast for the 2019/20 Spanish lemon season has pegged volumes at 1.1m tonnes, an overall decrease of 14 per cent on the previous year.

The fall marks a return to normality in Spain from the record production levels seen in 2018/19, Ailimpo noted, adding that this year's estimate would be confirmed depending on the availability of water in summer and autumn rains.

'The estimated global lemon production figure in Spain of 1,104,000 tonnes will allow Spain to continue to be the leading exporter of fresh lemon, and the second largest processor of lemon juice, essential oil and dehydrated peel in the world,' Ailimpo said.

In terms of variety, Fino lemon production will fall 8 per cent to 845,000 tonnes, Ailimpo predicted, while Verna volumes will tumble 29 per cent to 260,000 tonnes.

'This figure for Fino lemon production will allow Spain to consolidate its leading role in supplying customers and guarantee supply programmes,' Ailimpo noted. 'The reduction in the crop of Verna lemons, an autochthonous Spanish variety, is a consequence of the resting of trees after a record production season. In any case, the harvest estimate of 260,000 tonnes guarantees that the Spanish lemon supply will cover a large part of summer 2020 with good quality fruit.'

In its overall seasonal outlook for 2019/20, Ailimpo said that it expected a 'good and fair balance' of prices and distribution of economic value throughout the chain, which will allow the Spanish lemon sector to give a profitable commercial outlet to the harvest, while maintaining commercial competitiveness against the 'aggressive' supply of lemons from competing third countries such as Turkey (which Ailimpo said would continue to be subject to official pesticide controls at the European border), or Egypt.