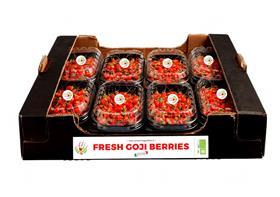 A campaign is underway in Italy to raise the profile of fresh goji berries grown in the country, with plans already in place to double production of the fruit as demand increases. The Goji Italia Consortium, which is primarily focused on selling the product as a fresh item rather than dried, recently reported a good harvest and is understood to be working on expanding its grower base for the coming season. And with customers in Germany, Belgium and the Netherlands already on board, the hope is that the group will also be able to capitalise on new opportunities in export markets in the near future.

Luca Loconte is the consortium’s sales director. In a recent interview with Italiafruit News, he outlined the group’s ambitious plan to create a strong market for goji, a product he said was extremely sweet and appreciated by children and adults alike. For Loconte, the biggest challenge at present is establishing a critical mass of supply that can then be marketed extensively. “We are still starting out with this crop,” he admits. “Our network of producers grows around 30ha but [in 2017] we expect to double that planted area.”

For the time being, the group’s grower base is spread across much of southern Italy, with production sites located in Puglia, Basilicata, Campania and Lazio, and this year new plantings are due to be made even further south in Calabria. But with the fruit apparently well suited to growing conditions throughout the country, other areas further up the peninsula are also under consideration. “We are thinking of expanding in the centre-north of Italy,” Loconte reveals.

This year, the Goji Italia yield is expected to be between 1.5 and 1.8 tonnes per hectare, which is likely to mean a combined harvest of 50 tonnes. Already, Loconte says, there is a modern supply chain in place that can deliver the fruit quickly from source to shop while retaining its quality. “We select and process the product just hours after harvesting, packaging the berries with stalks in trays and then sending them to our distributors, through whom we can even reach the supermarkets.” explains Loconte. “Berries without their stalks, meanwhile, go for processing: for drying, producing juices and jams or for fresh-cut, which is a segment that’s seeing growing demand.”

He is also keen to point out that the consortium’s own product is markedly different in terms of taste when compared with the “bitter” flavour of some goij also found on the market. That, in effect, is the challenge for Goji Italia: creating awareness of the fruit as a fresh option, as opposed to the dried form that has brought the name goji to some considerable prominence over the past decade. It’s certainly a challenge that Loconte and the consortium’s growers are ready to tackle.