Almería: a model of sustainability 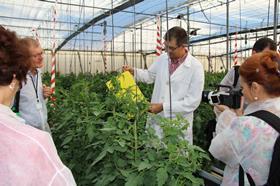 The ECPA press trip visits a greenhouse in Almería

Nestled between the Mediterranean and the rugged peaks of the Sierra de Gádor mountain range in south eastern Spain lies a sea of plastic stretching as far as the eye can see. At almost 30,000ha, it the highest concentration of greenhouse production anywhere in the world and supplies northern Europe with vegetables throughout the winter months.

On the surface, little appears to have changed since the area first rose to prominence as a horticultural powerhouse some 30 years ago. But beneath the plastic roofs a quiet revolution has taken place. Over the past decade, what once symbolised the dark side of intensive agriculture has been transformed into the embodiment of a thriving model of sustainable production. Since the pepper residue crisis of 2006, the industry has worked intensively to clean up its act and rebuild consumer trust. Through the implementation of an integrated pest management system has led to a dramatic fall in pesticide residues and today the percentage of samples that exceed the maximum residue levels set out by the European Food Safety Authority is well below the industry average (0.8 per cent versus 1.4 per cent for the whole of the EU). 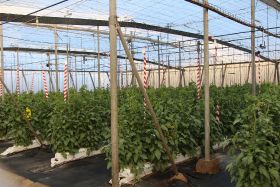 Almería’s production is almost entirely made up of small family-run operations averaging 2-2.5ha in size and this has proved one of the biggest factors in its transformation. Contrary to the typical perception of old fashioned family farming, the region’s 12,000 growers are well organised, innovative and flexible. Crucially, they are highly innovative and open to new technologies and can count on the highest concentration of technical agronomists anywhere in the world. More than 1,500 technicians are on hand to provide day-to-day support and advice on .

“Growers no longer treat their greenhouses as mini factories churning out product but instead see them as an ecosystem in which each and every organism plays an important role,” says Carlos Palomar of Spanish crop protection association AEPLA. “It mirrors the way in which human medicine has become much more focused on a holistic approach that focuses on prevention rather than cure.”

It means that chemical treatments are used only as a last resort once other treatment options have failed. Pesticides have also been refined to treat specific pests rather than tackling several problems, and they are applied for shorter periods of time.

The net result has not only been a sharp fall in residue levels, but a significant improvement in quality and yields, as IPM entails a far more hands-on approach to farming that enables growers to better regulate other aspects of production such as the use of fertiliser and other inputs. Along with increased productivity, IPM has enabled growers to significantly extend their seasons. Eight years ago, for example, the pepper season ended in January whereas now it runs through to March. 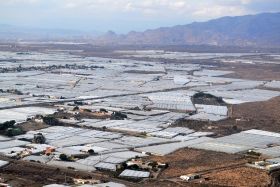 “The dramatic decline in residue detections shows that everybody is working better,” says ECPA director Jean-Charles Bocquet. “More importantly, it reinforces the public’s confidence in the safety of our products.”

In October the agency organised a press trip to Almería to showcase the work being done to support the reduction of residues through the promotion of IPM and good agricultural practices.

The aim of this pilot project is to share the lessons learned in Almería with growers in the Turkish region of Antalya, chosen because it is a major source of fruit and vegetable imports into the European Union. It operates through a ‘cascade’ effect, training up advisors who in turn impart the knowledge to others in their home country. So far the seven advisors who were trained at the Cajamar Caja Rural Las Palmerillas research station in Almería have gone on to train another 180 Turkish advisors who have gone on to train around 5,400 farmers.

“Building consumer trust is about ensuring the safety of their food – whether it is produced in Europe or elsewhere,” explains Bocquet. “This initiative is about sharing best practices so that we can produce more in a better way.”

It is, says Bocquet, an opportunity to raise public awareness of the work the ECPA is doing, and marks a sea change for what had previously been considered a somewhat secretive and inward looking industry. He acknowledges, however, that this is a change that has come about through necessity. He warns that unnecessarily harsh EU controls are eroding the competitiveness of the agricultural industry and putting its future in jeopardy. 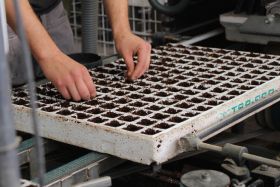 “Developing a new pesticide takes several years costs ten of millions of euros – it isn’t something that can be done overnight,” he says. “Unless we work together with the public and with policy makers to improve understanding of the benefits of crop protection, we run the risk of discouraging innovative research projects and this threatens the future of competitiveness of European agriculture.”