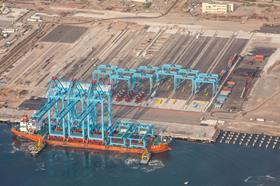 APM Terminals has taken delivery of some of the world’s largest and most technologically advanced STS cranes at the soon to be opened Lázaro Cárdenas terminal on Mexico’s Pacific Coast.

The 1.2m TEU capacity, semi-automated deep-water facility is scheduled to begin operations in 2016.

The first three of the world’s largest and most technologically advanced Ship-to-Shore (STS) container cranes and two rail mounted cranes for the intermodal rail facility have been delivered to the terminal (TEC2), now in the final stages of construction at Mexico’s second-largest container port.

The terminal development milestone was commemorated by a ceremony held in Mexico’s capital city, attended by Mexico’s general director of Promotion and Port Administration, Fernando Gamboa Rosas, as well as Maersk Group CEO Nils Smedegaard Andersen and other senior members of Mexico’s port and transportation sectors.

“Lázaro Cárdenas TEC2 will be the most technologically advanced container terminal in Latin America, and we are very proud to be a part of Mexico’s ongoing growth as a major world trading partner and global logistics hub,” said APM Terminals Mexico’s managing director JD Nielsen.

The Government of Mexico has announced plans to double port capacity over the next six years. While in Mexico, Maersk Group CEO Andersen confirmed APM Terminals’ interest in expanding operations into the Port of Veracruz as part of a future public bid, eventually linking the Pacific and Gulf Coast operations through intermodal rail links intersecting near Mexico City, at APM Terminals’ Cuautitlán Izcalli intermodal facility, located near 250 distribution centres in Mexico’s premier industrial zone.

APM Terminals signed a 32-year concession for the design, construction and operation of the Lázaro Cárdenas TEC2 facility, representing an overall investment of US$900m. Phase I will include a total of seven STS cranes which feature a 24-container row reach, along with 750 metres of quay, able to accommodate the largest container vessels, a fully-automated gate as well as an on-dock intermodal rail facility, the largest of its kind in any Latin American port.

“Mexico is an essential part of the growth strategy of the APM Terminals Global Terminal Network in Latin America, and around the world,” said Nielsen.