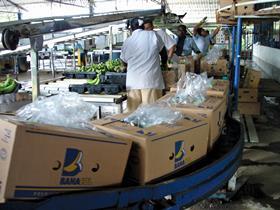 A standoff between banana workers and the police in Colombia’s Urabá Antioqueño region appears to have been resolved after Banacol reached an agreement with producers to pay for outstanding banana shipments. The deal brings to an end a stoppage that has caused severe disruption to the region’s banana exports.

Workers had blocked the main highway between Urabá and Medellín after Banacol failed to pay for ten weekly shipments, amounting to a sum of 5bn pesos (US$2.65m), protesters said. The unrest has already resulted in one person being killed and 24 injured.

According to a report in local newspaper El Meridiano, Banacol has already paid for six of the outstanding consignments and agreed to pay for the remaining four at a rate of one a week, meaning that in a month’s time the debt will have been fully repaid.

Under the terms of the agreement, Banacol also agreed to restore a US$1 cut in the box price that it pays to producers, introduced two months ago.

Producers are demanding a government subsidy of US$3 per box of bananas that is exported, bringing the industry in line with coffee producers.