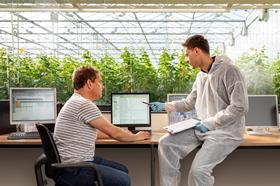 BASF Vegetable Seeds is planning a series of events and activities with its partners next year to mark the 20th anniversary since it started breeding high-wire cucumbers.

“Together with growers, plant breeders, consultants, and other partners, we have acquired a great deal of knowledge about high-wire cultivation and built up an advanced portfolio of high-wire varieties,” the company said.

“This will be celebrated together extensively in 2020. During the year, various partners will talk about the development of high-wire cultivation from their perspective and events and activities will be organised for networking, sharing knowledge, and gaining inspiration.”

Entrepreneurs began trying to grow cucumbers using the high-wire method in tomato greenhouses during the 1990s and the advantages – a higher production rate and better fruit quality – were visible immediately. But there was also a downside. It was still labour-unfriendly and there were widespread issues with viruses.

“It was not until several years later that high-wire cucumber cultivation developed rapidly, which can be partly attributable to Nunhems’ varieties,” the company said.

In 2009 and 2010, Hi Jack, Hi Tona, and Beesan were the first varieties to successfully enter the Dutch and Canadian markets. Since 2014, Nunhems’ cucumber varieties can be found in high-wire greenhouses around the world, from the Netherlands and Scandinavia to the US and New Zealand.

BASF Vegetable Seeds emphasises that it would not have been possible to develop high-wire varieties and crop concepts without the help of customers, consultants, and other parties.

“We would like to thank everyone who has contributed to this development and celebrate our success with them. We will take everyone on an exciting journey from the past to the future – via events, masterclasses, videos, and more,” Jancic said.

Looking ahead, the company predicts that technology will play a key role in this segment.

“Data management, automation, and lighting are the main aspects of cultivation technology,” Jancic continued. “On the consumer side, the main topics are health, flavour, and convenience. There are plenty of challenges and opportunities for us to take on together with our partners.”