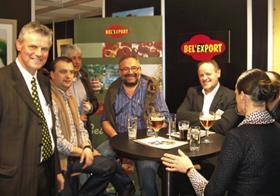 Belgian topfruit producer Bel’export has unveiled a new red pear, grown in the Czech Republic and known as D-color, to visitors at this week's Fruit Logistica 2010 in Berlin.

The distinctively coloured pear is available between September and March and, according to the company’s Tony Derwael, has attracted interest from retailers, including Marks & Spencer in the UK.

Such novelties could be essential for the topfruit market, which is currently struggling in Europe.

'There is a big crisis in topfruit at the moment,' says Mr Derwael. 'Prices are very low. We do not believe it has anything to do with the crisis. The main problem is that there is too much product in almost all European countries, eastern and western. Everyone is trying to offer promotions to get rid of volumes.'

Mr Derwael predicts that prices will continue to be the key factor throughout 2010.

'Supermarkets are battling with each other,' he says, 'and they are competing mostly on price, which is always bad for the growers.'

'The Russian market is very important for the Belgian Conference pear, importing more than half of our production,' says Mr Derwael. 'The market is also a price-setter. If Russian demand is up, prices go up.'

'Unfortunately, Russia is suffering from economic problems, and the government is trying to block product through the use of strict pesticide regulations,' he adds. 'This is making life difficult for Belgian exporters. New safety certificates for pesticides require a lot of paperwork.'