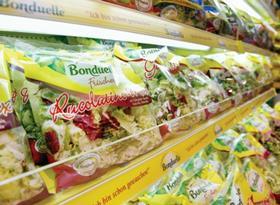 French group Bonduelle has outlined how its controlling family shareholder, directors and officers are uniting during the Covid-19 outbreak to 'support those who have suffered the most from the crisis'.

Bonduelle SCA general partner, Pierre and Benoît Bonduelle SAS, will propose to the 3 December shareholders general meeting to reduce by 20 per cent the group's usual distribution ratios, in terms of the dividend for the 2019/20 fiscal year – a proposal supported by the supervisory board.

According to Bonduelle, these sums help to fund the bonus being given to employees who have continued to staff the plants and have 'demonstrated a proud commitment to their work, setting aside their legitimate concerns in order to guarantee that everyone has access to food'.

The sums collected also help offset the lost wages of the lowest-earning employees, and go towards assisting employees who are facing challenging medical situations.

'These actions show that the civic engagement of the group and its teams in combating the coronavirus extends beyond the role of a responsible player in the food chain,' Bonduelle stated. 'This engagement is visible both inside and outside the company, at all levels, and it aims to touch as many people as possible, both on an ad hoc basis in response to emergencies and over the long term when different situations require it.

'For everyone, by everyone, and around the world, initiatives and joint efforts continue to be created and organised to best respond to local needs and the daily challenges of healthcare workers,' the group continued. 'In the United States, Canada, France and elsewhere in Europe, local community-oriented efforts are proliferating to help those who are most in need. American families in difficulty, Food Banks of Quebec, Lille students, homeless people in the île-de-France French region and charities of all types, among other examples, have received product donations thanks to our employees' extraordinary dedication.'

Bonduelle noted that, from mid-May to the end of August, it was offering free access to Cabaletta salad vending machines in the hospitals in Lille, France, giving healthcare workers round-the-clock, unrestricted access to a balanced diet.

'One thing is certain: although the Covid-19 crisis will have created challenges, it will also have offered, however, an opportunity to resoundingly affirm the values of solidarity and community integration that the employees of the Bonduelle Group so cherish.'