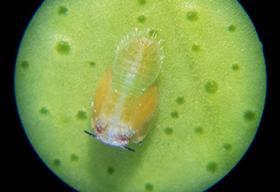 The Asian citrus psyllid, or Diaphorina citri Kuwayama, has been identified in Israel's central Emek Hefer region, prompting the agriculture ministry to launch a pesticide campaign, according to the Times of Israel.

The tiny bug, which can carry a disease that is lethal to citrus trees, is believed to have arrived on smuggled plant material, the ministry said.

The disease, for which there is no treatment, stunts tree growth and produces irregular misshapen fruit before ultimately killing the infected tree.

The bug is found in North and South America, as well as some parts of East Asia, the Gulf and southern Africa. The citrus greening disease it spreads has destroyed entire orchards in Brazil, California, Florida and Cuba, the Israeli ministry said.

Due to the size of established populations discovered so far, officials believe the insect has also spread to adjacent areas and have performed a thorough assessment of certain areas, including Emek Hefer, and specific forests.

Monitoring arrays and new traps were reportedly set up in areas close to where the pest was identified. An emergency meeting at the agriculture ministry led to a decision to spray infected plots.

The first stage of the plan will see 75ha of Emek Hefer orchards sprayed over the winter, with operations continuing throughout the year. There are a total of 16,900ha of citrus orchards in Israel.

Growers are set to receive compensation, the ministry said, while constant monitoring may be complemented by assessments at the start of each season should they be determined necessary.

Shlomit Zioni, director of the ministry’s Plant Protection and Inspection Services, said that small-scale trials of pesticides were showing positive results, while the search for other infected areas continued.

Early detection, she told the Times, raised the chances of exterminating the pest and cost “immeasurably less” than dealing with an established population.

“If we do not succeed in eradicating the pest in this targeted operation, it will be a real threat to the local citrus industry to the point of extinction, as has happened elsewhere in the world, as well as increasing the use of insecticides over years and across the country,” Zioni said.