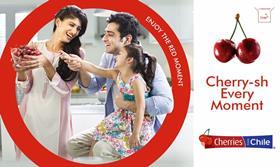 Exports of Chilean cherries to India are up 53 per cent on last year so far this season according to the Chilean Cherry Committee.

The sector is ramping up promotional activities in a number of new countries as it seeks greater market diversification as export volumes continue to grow.

“In India, most importers, wholesalers and retailers have reported good sales of our cherries. In addition, we have promoted promotions, especially in regional cities, obtaining a very good reception from consumers,” said Charif Christian Carvajal, Asoex’s marketing director for the Asian and European markets.

Marketing activities have covered digital and print media, e-commerce, retailers and greengrocers, as well as wholesale markets across ten cities.

Promotions have also been carried out on social networks via influencers such as Meghna, Chef Harpal, Rakhee, Varun Inamdar and Vicky Ratnani, among others, and have achieved more than 2.3m hits.