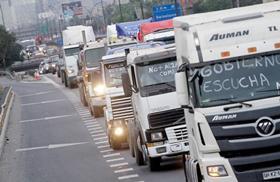 Chilean customs workers are staging a general and indefinite strike from Wednesday at 08:00.

The National Association of Customs Officials of Chile (ANFACH) accuses the government of failing to honour previous agreements on pay and working conditions.

Gustavo Rivadeneira, president of Bolivia’s Heavy Transport Chamber, said the latest strike would result in large losses for the sector.
“We are again concerned that the strike that customs officials have announced.This conflicts with the provision of the international cargo service and causes great economic losses to our transport sector and to importers and exporters,” he said.