Chilean truckers have called off an eight-day strike after obtaining concessions from the government. The walkout, called in protest at rising fuel prices and highway safety, blocked highways and prevented fruit from reaching ports, causing one Cherry Express vessel to leave with just half its scheduled load. 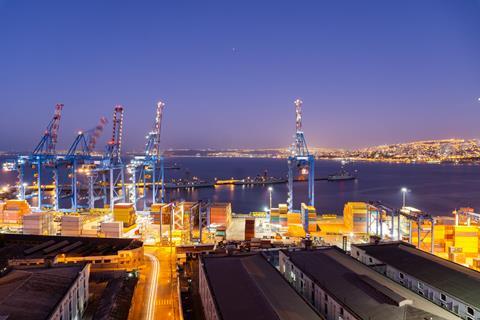 Access to the Port of Valparaiso was blocked during the walkout

The unions called off the action after the government agreed to freeze the price of diesel for four months and improve safety on highways.

Speaking to Portal Portuario, Iván Mateluna, president of the Federation of Truck Owners of the Valparaíso Region (Fedequinta), said truck drivers in the Region are experiencing long delays in accessing terminals and ports, which could complicate shipments of fruit.

Cherries due to be loaded on the Cherry Express service vessels bound for China are causing particular concern.

Mateluna said it would take “at least two more days, to around Friday or Saturday”, for the situation to normalise.

This is the second truckers’ strike in the eight months since president Gabriel Boric assumed power. On both occasions, fruit was one of the most affected products, leading to substantial losses for the sector.

Ninety per cent of cargo is transported by road along Chile’s 5,000km of highways, giving truckers significant bargaining power.