Chiquita buses back in London 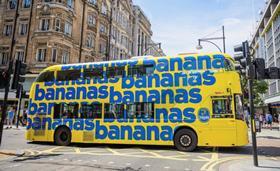 The tourists may be largely absent, but Chiquita's banana-emblazoned double-decker buses are set to return to the streets of London for a sixth year, promoting a colourful message of fun and healthy living this September and October.

This summer, with visitor numbers slashed by the Covid-19 crisis, banana giant Chiquita has shifted gears to reinforce its mass appeal to local consumers, focusing on the superior taste of Chiquita bananas.

'The double-decker buses are synonymous to being considered London’s national symbol,' said John Cockle, Chiquita’s sales and market director, UK and Ireland. 'Featuring a bold and impactful yet fun and vibrant campaign, in true Chiquita fashion, on such an iconic platform is a perfect combination to bring local residents a dose of fun and excitement in their everyday city lives.'

The two-month campaign will reportedly be supplemented with two weeks of digital support on Cromination’s large format programmatic displays in London's Kensington district.

'Building on the past years’ London bus campaign success, we’re thrilled to return to London’s streets, once again encouraging local consumers to ‘Think Chiquita’ and amplify the banana category positioning to support our growth in the UK,' said Cockle.